For the faction in Barbarian Invasion, see Eastern Roman Empire.

The Eastern Roman Empire is a playable faction in Total War: Attila.

The new administrative centre at Constantinople has allowed the Eastern Romans to replace the antiquated systems throttling the economy and enfeebling Rome’s Emperors. As a result, new trade networks and fiscal reforms fill its coffers, all run by a centralised bureaucracy and a powerful state church. The East has safely weathered the storm of barbarian migration, often by diverting them into the West. However, the young Emperor Arcadius will have to negotiate barbarian threats, court intrigues, and the ever-present Sassanid menace to ensure that the last light of the Roman Empire continues to burn.

While the Western Roman Empire ails and withers, the Eastern Roman Empire is an economic powerhouse, and reaps the benefits of this through treasury interest and trade tariffs. Militarily, she begins the campaign in a reasonably capable position, but with a clear and immediate threat as Alaric leads his Visigoth armies into Roman-held Thracia and Macedonia… mere regions away from Constantinople itself.

"The benefits of Empire hold a certain appeal, especially to the outside observer."

"Straddle the crossroads of the world and take pick of everything that passes by." 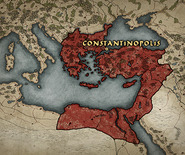 Eastern Roman Empire starting position
Add a photo to this gallery
Retrieved from "https://totalwar.fandom.com/wiki/Eastern_Roman_Empire_(Attila)?oldid=42822"
Community content is available under CC-BY-SA unless otherwise noted.