Liu Bei is a Chinese name; the family name is Liu.
For the faction, see Liu Bei

Liu Bei is a playable and historical character featured in Total War: Three Kingdoms. Nicknamed Virtuous Idealist, He is a faction leader and one of the Commander class heroes in his faction. Liu Bei's ultimate goal is to preserve the lineage of Han dynasty, form the Kingdom of Shu, and attempt to unite all of China under his rule.

Humble, virtuous and kind, Liu Bei is an inspiring presence, forging unshakable bonds with those who follow him…

Liu Bei is the choice of the confident, wise and modest ruler. Someone who cares about the people, understands their needs, wants to restore peace in the land and knows when an opportunity for victory shows up to make it so.

As long as Liu Bei leads his faction, his militia units do not cost any upkeep. This makes it easy for him to maintain his forces, especially early on. Liu Bei is only able to recruit one army at the start of the game. Only after he has established himself can he field more forces and effectively expand his territory. He has no powerbase worth mentioning, though he does begin play with the most powerful army on the map.

When Liu Bei gains enough prestige by building his dynasty, he is able to raise additional armies, and here’s when player need to start building his real powerbase. A confederation with Liu Biao’s faction after his death can also be a way to expand player's empire even further.

Liu Bei starts in a small part of the Dong province with his brothers Guan Yu and Zhang Fei. At this point, he doesn’t hold any territory – it’s just him and his brothers with a peasant militia army. Remnants of the Yellow Turban rebellion still surround him, so his initial challenge will be to break through these. As the Han Empire collapses, Liu Bei wants to save the dynasty by rooting out rebels and corruption. But first, he needs a power base in order to replenish and build his strength. Liu Bei have to deal with the local rebels and reinstate law and order. From there, his starting position implies various paths of expansion, the main routes being either south-east toward Langye commandery, or westwards toward Luoyang commandery.

Liu Bei’s early dilemma is about helping Tao Qian against Cao Cao. Tao Qian had allegedly killed Cao Cao’s father Cao Song, but Tao Qian of course denies this. In any case, it triggers conflict between Cao Cao and Tao Qian, where the latter seeks help from Liu Bei. The player can decide to join this conflict on the side of Tao Qian. This will mean a potentially difficult war against Cao Cao, but if the attack is repelled, he will have proven his worth and virtue. When Tao Qian dies (he is a rather old man already at the start of the game), his followers will offer to join Liu Bei, which will effectively confederate Tao Qian with Liu Bei.

Liu Bei was born in 161CE in Zhuo County (Zhuo Commandery). Like Sun Jian, he grew up in a poor family, a member of the common class. Liu Bei lost his father when he was still a child. He was a descendant of Liu Zhen, a son of Liu Sheng and a grandson of Emperor Jing. From childhood, he was full of ambition and seemed destined for greatness. Empathetic with the common folk, he easily gained the people’s trust and support. This particular trait made him a feared adversary to his enemy Cao Cao.

Liu Bei is honest and kind to his friends, and well-liked by his companions. A modest and merciful warlord who cherishes his devoted followers, he is widely known as a benevolent and humane ruler, one who cares for his people and surrounds himself with great advisers. He is a brilliant politician and leader whose caring nature motivates powerful heroes to join his side and fight for his cause.

For Liu Bei, Dong Zhuo represents chaos, and he wants nothing more than to see corruption uprooted and the Han dynasty restored. The Liu family was only nominally attached to the Han, yet there are those who urge Liu Bei to save China from madness and restore the collapsing dynasty. Humble, virtuous and kind, Liu Bei is an inspiring presence, summoning strength from unlikely places, and forging unshakable bonds with those who follow him. Despite his common roots, the blood of ancient Han emperors flow through Liu Bei’s veins.[1]

When the game starts, Liu Bei has neither a wife nor any children, which means the player will need to focus on building the dynasty and securing a suitable heir to continue the Shu legacy. Players can aim to secure powerful diplomatic marriage; or by marrying a loyal member of Liu Bei's court, or the player can skip marriage altogether and choose one of Liu Bei's sworn brothers to be the heir and have them lead Liu Bei’s faction after his death.

Liu Bei's best friends are his sworn brothers - Guan Yu and Zhang Fei, which both have very high initial bonds with him. 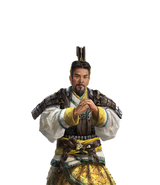 Liu Bei, Leader of The People

Liu Bei and his brothers
Add a photo to this gallery

Retrieved from "https://totalwar.fandom.com/wiki/Liu_Bei?oldid=50265"
Community content is available under CC-BY-SA unless otherwise noted.