Lizardmen are one of the playable factions in Total War: Warhammer II.

Roaring out of the dense jungles of Lustria, these ancient, cold-blooded warriors are the servants of the Old Ones, enactors of the Great Plan and the true protectors of the world.

Brought low in millennia past by the daemonic incursions of The Great Cataclysm, their grand civilisation now lies in ruin. But a handful of Slann Mage priests still live, and with them hope – that their people may rise anew. Tireless in their quest to restore order to the world, the Lizardmen field a glittering diversity of scaled warriors, from the humble, nimble Skink, to the titanic Carnasaur: apex-predator of the Lustrian jungles. 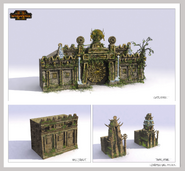 Stegadon concept art
Add a photo to this gallery