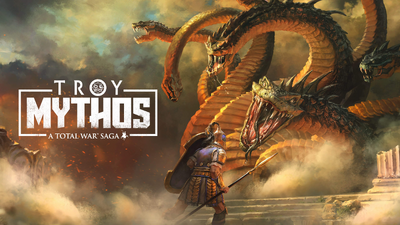 Mythos is the fourth major DLC for a Total War Saga: Troy. To be released on the 2nd of September, 2021. The DLC includes a new game mode, new factions and unit rosters, three new mythical creature and quests to capture them, divine powers, and adds much more mythic flavour to the ancient world.

Mythological mode has a large number of other changes, gameplay and visual. Familiar units such as the Minotaur, centaurs and harpies, among others, have been redesigned and upgraded into their actual monstrous counterparts.

The battle maps and the campaign map has been updated to bring the gods of ancient Greece closer, as gods now will be present on the battle map, watching over the engagement from the skies above. They can also have a much stronger presence on the battlefield, lending the armies their aid if a side has managed to suitably impress them. The Divine Will system is expanded further, divine favour now grants players the use of abilities such as the Thunderbolts of Zeus, or the Epic tides of Poseidon.

Embark on grand expeditions in search of the Cerberus, the Hydra and the Griffin! Harness their powers in war, take them into campaign and recruit their unique monstrous units. Each has their own set of associated units, buildings, in-battle and on-map special abilities, and other bits and pieces depending on the creature.

Lernean Hydra
One of the twelve labours of Herakles, slaying the nine-headed beast provided a unique challenge: every time Herakles would cut off a head, three more would sprout in its place. So, with the help of his cousin Iolaos, Herakles used fire to cauterise the wounds to stop the heads from regenerating. Even then, one of the Hydra’s heads was truly immortal, and so it was buried deep under a massive rock, consigned to oblivion. Yet, long after Herakles' own doom, the waters of Lake Lerna turn to poison once again and in the toxic mists the Hydra slithers.

Griffin Patriarch
The griffin is among the most noble of all liminal mythological beasts, incorporating into itself the animal kings of both land and air, as well as evoking the invisible threads between earth and sky. It has long been known among treasure hunters throughout the ancient world that wherever griffins are, there is gold as well.

Cerberus
Cerberus, brother to the Hydra and son of Typhon, the inconceivable creature who challenged all Olympians and almost defeated them. The three-headed hound of Hades that guards the gates of the Underworld to prevent the dead from leaving. No one really knows what could happen when Cerberus and his shades cross over to the lands of the living – only that when souls flow out, other must flow in, and that wherever the Hound is, hell is there, too.

Each beast requires great questing, dispatching a hero and their troops to find evidence of, track down, and eventually fight and recruit the great beast. A Mythic Expedition can only be attempted once per campaign. As part of this Expedition the questing army will face five dilemmas that need to be resolved, preparing the troops for the final confrontation. When beast is eventually tracked down, the final phase of the hunt begins: a mighty battle will take place, where victory would allow the player to recruit the mythical beast and its retinue.

Once the Mythic Expedition has finished, the creature of choice will act as an agent on the map, capable of carrying out various special actions, as well as joining armies to fight as a powerful unit. The antagonist faction will also be able to obtain their own Mythical creature.

The following section is subject to removal pending further information on the patch.

In a free update accompanying the release of Mythos, Total War: Troy will also be playable in Historic mode. This joins Mythological and Truth Behind The Myth to make three distinct campaign styles, each with unique properties.

Historical mode
In historic mode heroes are accompanied by units of bodyguards to represent their power on the battlefield. Godly powers, monsters, and other single-entity units do not make an appearance. This changes your battle style and strategies significantly.
Logistics
Supply lines have been reworked into an Administration system for all three modes. This involves a new pooled resource – Administration Burden. Each Hero, unit and settlement has a defined amount of Administration Burden. Units have different amounts based on their tier. The stronger a unit is, the more Administration Burden they have, and the same is true of settlements. Heroes also have a burden, while Epic Heroes have less.
The more Administration Burden a player has, the more negative effects are unlocked, but in return, royal decrees and influence will be gained faster. The costs for recruitment and upkeep go higher and are broken down by resource – food costs are the first to go up, followed by bronze and gold.
Others
Balance changes
Bug fixes
Addition of achievements, and many more smaller changes.