Total War Saga: Troy is a turn-based strategy video game developed by Creative Assembly Sofia and published by Sega. The game was announced on the 12th of September, 2019 and released on the 13th of August, 2020. Troy is the second installment in a Total War Saga subseries succeeding Thrones of Britannia.

The game is set in the Bronze Age, during the Trojan War; reconstructing one of the greatest stories ever told. The world of Homer's Iliad is rich with myth, legends, gods and monsters. Troy casts these stories through a historical lens to consider what might have really happened but ultimately lets the player decide which heroes will fall in battle and which will be immortalised in legend. (read more) 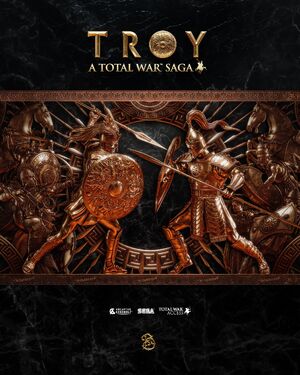 The City of Troy
After generations of successfully guarding its strategic location at the mouth of the Hellespont, the legendary city of Troy at the onset of the war was considered nearly impregnable thanks to its high walls of the finest craftsmanship and its elite defending forces. Even the assembled Achaean host, said to have sailed across the Aegean Sea on a thousand ships, laid siege to Troy for an entire decade before the events of the Iliad. (read more)
DLCs
1/3
Community content is available under CC-BY-SA unless otherwise noted.
Advertisement
Follow on IG Newsletter Join Fan Lab