Total War: Three Kingdoms, stylized as Total War: THREE KINGDOMS, is the 13th installment in the Total War series, developed by The Creative Assembly. It was announced on January 10, 2018, and released on May 23, 2019. The game is set in China during Three Kingdoms era.

The game features two game modes. The first mode, "Romance", is based on the highly romanticized account of the era, Romance of the Three Kingdoms, in which generals are gifted with nearly superhuman strength. Another mode, "Records", based on Records of the Three Kingdoms, presents a more historically accurate version. In Classic, the generals have their powers removed and they can no longer be commanded separately.

The game begins in 190 CE, in which the once glorious Han dynasty is on the verge of collapse. The enthroned child Emperor, Xian, was manipulated by the warlord Dong Zhuo, at the age of eight. Dong Zhuo's oppressive rule leads to chaos. New warlords rise and form the coalition to start the campaign against Dong Zhuo. However, with each warlord having personal ambitions and constantly shifting allegiances, the player needs to utilize strategy and tactics to unify China and write their own history.

The game features 12 playable factions at launch, without counting DLC and FLC characters. Total faction count is 36 including vassal and NPC factions. Each faction is led by a warlord.

When The Creative Assembly start to develop the next historical title for the Total War series, they're very keen to create something based heavily around characters. The Creative Assembly ultimately decided on the Three Kingdoms period, which many records on specific people from the time, as well as potential larger than life characters available for each faction.

According to the Pawel Wojs, Project Art Director at Creative Assembly, the team created Total War: Three Kingdoms as a game that will break the status quo. The team didn't specifically planned for the Chinese audience for the game, but believed that Three Kingdoms needs to be done "differently" to be successful in the Western market, and if Creative Assembly "do it right, it will definitely resonate in the East."[1]

Game cover on the steam page 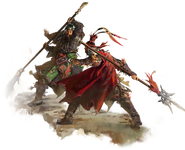 Transparent artwork for the game cover

Heroes on the battlefield