Xiahou Dun is a Chinese name; the family name is Xiahou.

Xiahou Dun is a unique legendary Champion hero in Total War: Three Kingdoms. He is a member of Cao Cao in 190, 194, and 200. There is a noticeable change in his character art between the 194 and 200 start as Xiahou Dun famously lost his eye in battle during that time.

Xiahou Dun is a legendary one-eyed General fiercely loyal to Cao Cao. In a battle against Lü Bu's forces in the late 190s he was hit in the eye with a stray arrow. He proceeded to yank the arrow out, devour his own eyeball, then charge towards the enemy General, Cao Xing, killing him on the spot. 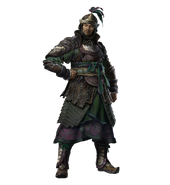 Xiahou Dun before losing his eye 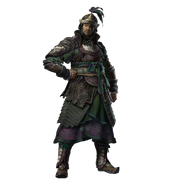 Xiahou Dun was born in Qiao somewhere around 155 or 156. He was the older cousin of Xiahou Yuan and closely related to the warlord Cao Cao. Dun was known for his extreme temper, and he famously killed a man that had insulted his mentor at the age of fourteen. Despite his tendency for violence and being quick to anger, Xiahou Dun was known for his sense of justice and righteousness.

When Dong Zhuo seized the emperor and the Han Dynasty collapsed, Xiahou Dun joined Cao Cao's army alongside his cousin Xiahou Yuan. Xiahou Dun first served as a major under Cao Cao before being promoted to a general himself. Despite the coalition against Dong Zhuo failing, Dun remained devoted to Cao Cao.

In 193 and 194, Cao Cao led two large invasions against Tao Qian to avenge Cao Song's alleged murder by the governor's hands. Xiahou Dun was to remain behind and guard Cao Cao's home province. During this time, a commander, Zhang Miao, started a rebellion against Cao Cao under the banner of Lü Bu, handing much of the commandery over to him.

Xiahou Dun gathered a small militia and began fighting Lü Bu before being captured and held for ransom. Thanks to Han Hao, another of Cao Cao's commanders, Xiahou Dun was released by Lü Bu's men, who begged for forgiveness. Han Hao had them all executed. Before long, Cao Cao returned from his campaign against Tao Qian and joined Xiahou Dun in the war against Lü Bu.

This all leads to a legendary story that made Xiahou Dun famous across China. During a battle against one of Lü Bu's generals, Cao Xing, Dun caught an arrow fired by Xing in his left eye. Lü Bu's men cheered, assuming Dun would order a retreat. Instead, the general pulled the arrow with the eye attached out, proceeded to eat his eyeball in front of everybody, and ordered a charge. In the subsequent battle, filled with rage, Xiahou Dun reportedly killed the commander of the small army himself.

This story spread across China, and Xiahou Dun easily became the most feared general of Cao Cao, being portrayed as an unstoppable warrior. He earned the nicknames of "Blind Xiahou" or "Blind General", which he did not enjoy in the slightest. He was reported with destroying any mirrors to not look at his face. A handful of his soldiers were stupid enough to call him Blind Xiahou to his face early on, which usually earned them an almost immediate execution. After that, people only used the nickname behind his back.

Eventually, Cao Cao defeated Lü Bu, and for Xiahou Dun's bravery, he was promoted to governor, gained a military promotion, and became a marquis. Xiahou Dun continued to follow Cao Cao for the rest of his life, fighting many battles against Liu Biao, Liu Bei, and later Sun Quan. When Cao Cao died in 220, Cao Pi named Xiahou Dun as the commander-in-chief of Wei, which he could not enjoy for long as he died shortly after from old age.

Retrieved from "https://totalwar.fandom.com/wiki/Xiahou_Dun?oldid=63075"
Community content is available under CC-BY-SA unless otherwise noted.